Preparing for the roof and repairing the second floor. 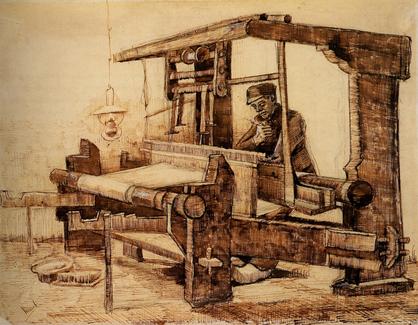 About Us:Who we are and how Baker Allegan Studios, Sow Spun Silk and Old Mill Yarn Got started.

Outside photos of when this project started

Early pictures of the Mill District and Baker Furniture Factories

The saying goes:"You can't make a Silk Purse from a Sow''s Ear".Well... if you look at the pictures of our project, you'll see that we turned this Sow's Ear of a building into a Silk Purse... Hence our studio name: Sow Spun Silk. 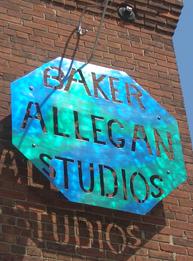 Debbie Leverence started out as a seamstress in 1980 doing alterations and custom clothing. She quickly branched out into creating costumes for the local theater group. From there, she took on the daunting task of creating outfits and costumes for dance and skating teams. Her most notable garment was a cape she created for Aretha Franklin's opening number in Atlantic City Dec. 2nd 1988.

Debbie always thought that the ultimate material to create with was hand-woven fabric, made from hand-spun yarns. To that end, Debbie attended weaving classes at Greenfield Village, in the Henry Ford Museum and studied Textiles at Henry Ford Community College and Eastern Michigan University. She has now been Weaving and Spinning for over 20 years, creating her own yarns from Alpaca, Llama, Wool, Angora, Silk, and Mohair, then weaving it into custom fabric. Her dream was to someday have her own Fiber Arts Studio.

Debbie met her Husband Joe, a self-made engineer, inventor, mechanic and woodworker in 1999, and when she moved him in, he came with a satellite dish and a big screen TV, (Such a Deal!!!). She had never heard of nor watched the HGTV channel, but when she found it, she was hooked. It was bound to happen, she found the show called Re-Zoned, where unusual people purchase unusual commercial buildings and turned them into their homes. Thus began the journey. They discovered the City of Allegan one day while attending Michigan Fiber Festival. They toured the town and visited the antique shops and had lunch at the Hubbard Street Grill. Unfortunately, they forgot where that quaint little town was when they started looking for a building to renovate. They started looking at towns near the Dearborn area where they lived, and moved west from there. Three years went quickly by, going from town to town, trying to find the right building and town. Debbie was running low on supplies for her weaving and spinning and decided to hit the Michigan Fiber Festival again in the fall of 2005. When they crossed the Old Iron Bridge, Joe recognized the town and said; "This is it! This is that town we were trying to remember!". They went through the town looking at buildings. Debbie fell in love with the beautiful old Allegan Gazette building on Trowbridge street. Joe fell in love with the condemned buildings down in the Mill District.

"Our dream is to turn the Milling District into a Historic, Culture, and Art Mecca, along the lines of the Historic Greenfield Village at The Henry Ford Museum in Dearborn".

When Joe showed Deb the building he wanted, she said; "I don't care what you say, I will NEVER live in that building". When Joe told her the price and size.... she said; " You know, that's really quite a lovely building, with some flowers, some new curtains...." . They struck a deal with the Owner, and bought the building in the Fall of 2006. Two and a half years and one flood later, Joe and Deb, spun that sows ear into the silk purse it is today.

Doing a vast majority of the work themselves, from drawing up the plans to doing the actual build, they were involved in every aspect of the process. Being lovers of antiques, they built their building using historically accurate materials. In many cases, using architectural salvage materials from the period of the building. "We were concerned with the doors for the building, how were we going to find so many doors that would match?"

With the lower level starting out a wide open 3000 sq/ft and designed to be set up as a 1907-1910 office building, this was to house the 6 Artist Studios. The main floor with the Art Gallery and Weaving Studio, also to be set in 1910, and the top floor as their 3200 square foot Loft apartment, they needed a lot of doors, and since the building was a warehouse, there weren't any original doors to re-use.

Fortunately, they found a salvage company in Grand Rapids that just got the contract to salvage out a School that was going to be renovated. "We were able to get 35 matching solid oak doors with their original 12 pane "Snowflake" glass".

They also had to replace all the windows in the building. This was a daunting task, as the Historic District Commission required the new windows had to look like the originals. They found a window company in Detroit that would build and install historic replicas of the original windows, only this time with double panes of glass. Not cheap... but well worth the investment.

The original "Flat" roof had rotted out many years ago and the previous owned was talked into putting a "Pole Barn" metal roof on the building. That was over 20 years ago, and that roof too was leaking like a proverbial sieve. "We redesigned the roof to be a "Low Slope" roof that would fit within the parapet of the facade, and slope to the rear of the building. this meant lowering the rear wall by about 24 inches". They were able to pull this off while still being under the old metal roof. They removed the original flat roof, and hired a company to build the new roof, and after it was nearly complete, (All but the new rubber surface) they brought in a crane and removed the metal roof, trusses and all, in three huge pieces. Many people came to watch, and for weeks after, were asking when were we going to put the new roof on? not realizing that the new roof was already there.

The building is in a Historic District, and everything we did to the outside of it had to be approved, but that wasn't a problem, as we wanted the restoration to be historically accurate, and in most cases, we were more demanding of ourselves on the accuracy of the restoration, than even they required. Even the Handicap ramp was built to look like a Rail-Side loading dock. If antique architecture interests you, you will enjoy a tour of the building and the many stories of trials and tribulations we went through in the process. Eventually, we will post pictures of the restoration, and share the stories here. Check back often or better yet, stop in and see us.